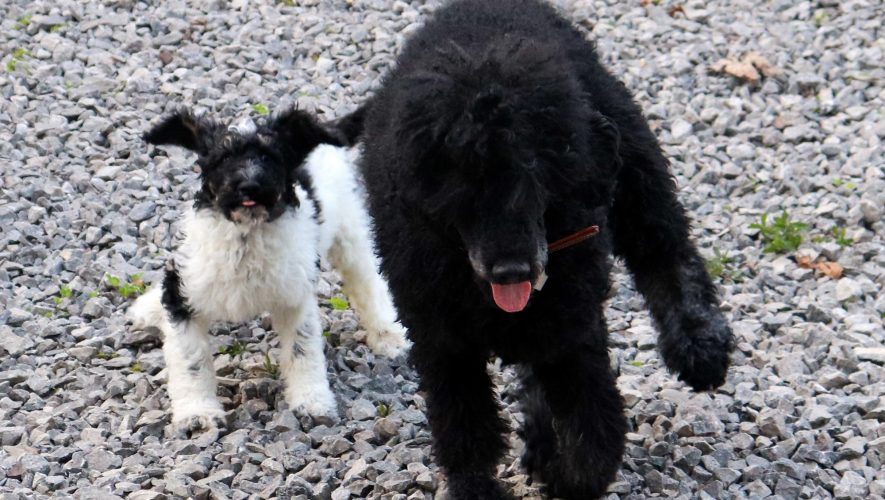 I get asked a lot about age appropriate exercise for puppies, since it’s important not to overexercise your puppy putting unnecessary stress on their developing joints. The best type of exercise for a puppy is just to play with him, even just let him sniff and romp around the yard at his own pace. Let him run around or chase you around a bit and he will be able to rest when he feels the need to.

The problem with walking them on a leash when they are young is that they can’t rest if they need to, they will just keep going along with you. Of course you want to work on leash walking,  but that is best to do in the yard at first and not out on a big hike. You may only work with him for two minutes at a time on the leash at first.

Although there is no true formula how much exercise is too much for a puppy, a good thing to go by is 5 minutes a day per month of age for your puppy (up to two times a day). So for a two month old, two ten minute exercise sessions would be plenty. When he is three months old, it would be 15 minutes and so on. Don’t get stuck on the times here, its just to give you an idea. Just to show that a puppy shouldn’t be going out for half hour walks when you first bring him home.

If you are interested in jogging with your puppy one day, its not a good idea to jog until growth plates are closed which can vary with each dog. Standard Poodles are considered large breed so can grow until 2 years old.  I’m not saying you can’t run with him at all until he is two, just take it easy and do short sessions. If you research you’ll see that 18 months is a commonly suggested age to start jogging. Make sure he is used to walking before starting to run though. You want to build up to it.

I also want to mention that waiting to spay/neuter until after puberty is reached (usually around 12 months but it can vary) can help the growth plates close. The surge in hormones once sexual maturity it reached is beneficial for proper bone development. Although we aren’t x-raying growth plates, being breeding dogs, ours tend to not grow much after a year old.

Each dog is different for how much exercise they need as an adult. Yes, Poodles are considered high energy but ours are pretty adaptable and aren’t climbing the walls if we don’t let them run wild and free every day! Remember mental exercise is good too and can tire a dog so its a good idea to incorporate that type of training throughout your dogs life as well.

When first starting off with mental exercise, or teaching your puppy new things, short sessions are key here as well. If you work on teaching him to “sit” for example, you may have him do it a couple of times and then stop for a little. Do it again later in the day or even just after an hour. The point is you don’t want to mentally exhaust your puppy, he’ll lose focus and it will frustrate the both of you.

And one last thing, jumping back to physical play, if you keep your play sessions more calm, he will be better behaved as he matures. Its cute to let puppies go wild, jump on you, and bite your fingers but not so cute when they do that as they get older! Have fun with him of course but just keep that in mind

To sum it up, it doesn’t hurt to be conservative in exercise when letting your puppy grow and mature but it can hurt to overdo it. Since there is no way to tell for sure what is too much, just being aware of the fact that overexercise can cause problems will help you make informed decisions about what is appropriate for your puppy. You want your puppy to grow into a dog that is going to live a long happy life with you. Taking the extra time and precautions will be worth it in the long run.